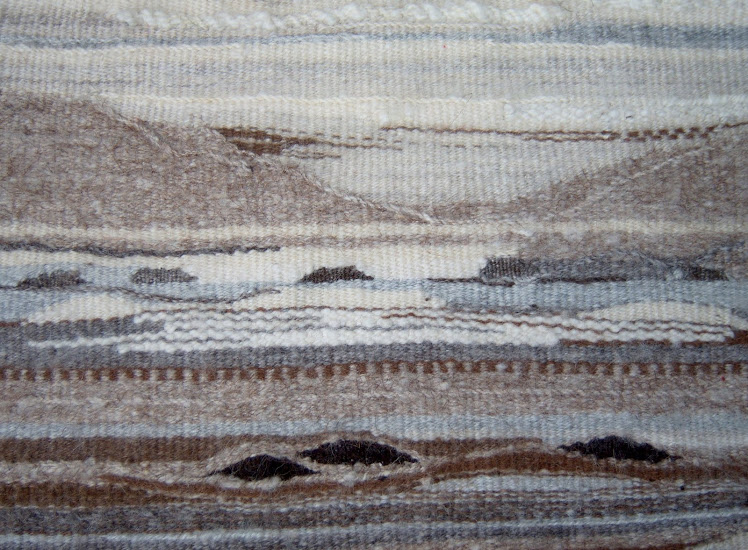 There's a lovely thread currently running in one of the local Ravelry groups, involving lovely, lovely people and some exceptionally lovely spindles.  Everyone is enthusiastic about their spinning, about finding the right tools to do the jobs required, about discovering the joy of working with beautiful, well-crafted objects.  I'm having a tough time resisting the call to collect more tools.  I need to resist-a few new spindles came home with me from Fibre Week and I'm at the point where I should be thinning the herd, not expanding it.  Beauty calls, though, and it's taking much of my will to resist its siren song.

My Hungry Ghost tends to manifest in my spinning.  I'm not tempted by fancy houses, or clothes (that's quite clear!).  I've never owned a car (which is not as noble a gesture as you might think, since I have an excellent, live in chauffeur); I don't travel that well, so I never want to stray far from home. If you gather from this description that I might be in the running for the Poster Child of Non-Consumerism, you'd be off-base; I may not be haunted by hunger for the usual Western measures of success, but I'm haunted nonetheless.  My Hungry Ghost is howling now and I need some way to calm Her.

One of the requirements for Level 1 of the Master Spinner Programme is stick spinning. Students must spin a 10 yard sample skein of wool, using only a "twisty stick," which consists of a dowel with a cup hook in one end.  The twisty stick is a step up from thigh spinning, which uses no tools other than your body.  A bit of fibre is rolled up or down the thigh to elongate, twist and strengthen it, more fibre is added, elongated, twisted, until you have a useful amount of yarn.

This style of spinning is painstakingly slow.  You might think that little yarn can be produced this way.  Not so-many cultures, including those of the Pacific Northwest Coast in Canada, used thigh spinning and other forms of simple spinning to produce stunningly beautiful Dancing Blankets, and other ceremonial or practical objects.  Compared to modern tools and the speed at which hand spinners can produce yarn today, thigh spinning or stick spinning is primarily viewed now as an historical curiosity, something we do to remind ourselves just how slow yarn production once was.  We honour our ancestors by sampling bits of string on a stick.

It's the slow pace of stick spinning that I turn to for help in quietening my Hungry Ghost.  I take a handful of Corriedale locks, attach fibres to fibres.  I twist and pull and twist and pull until thread forms, mere centimetres of string, which I wind around the stick for storage.  I pull and twist more fibres. The twist runs along the path to my fibre hand, strengthening the connection between hand and spindle.  As I work, the Hungry Ghost watches, looking for an excuse to complain again, but the flowing rhythm of the fibres soothes her and she begins to settle as I meditate on the powerful act of making string.

Our ancestors would be likely astonished at my use of stick spinning as an act of meditation. Then again, perhaps they wouldn't.  Perhaps, as they spun together, in work, in rest, in community, they, too, felt the connection between hand and heart, between body and spirit, between themselves and all that is.

My Hungry Ghost is quieter, now.  Still, I turn the stick, pull and twist the fibres and set my mind to the task of making yarn.  The Ghost remains nearby, but for a moment, She is not quite so Hungry.

deborah
I love all things fibre. Every day brings something new--what can I learn today?